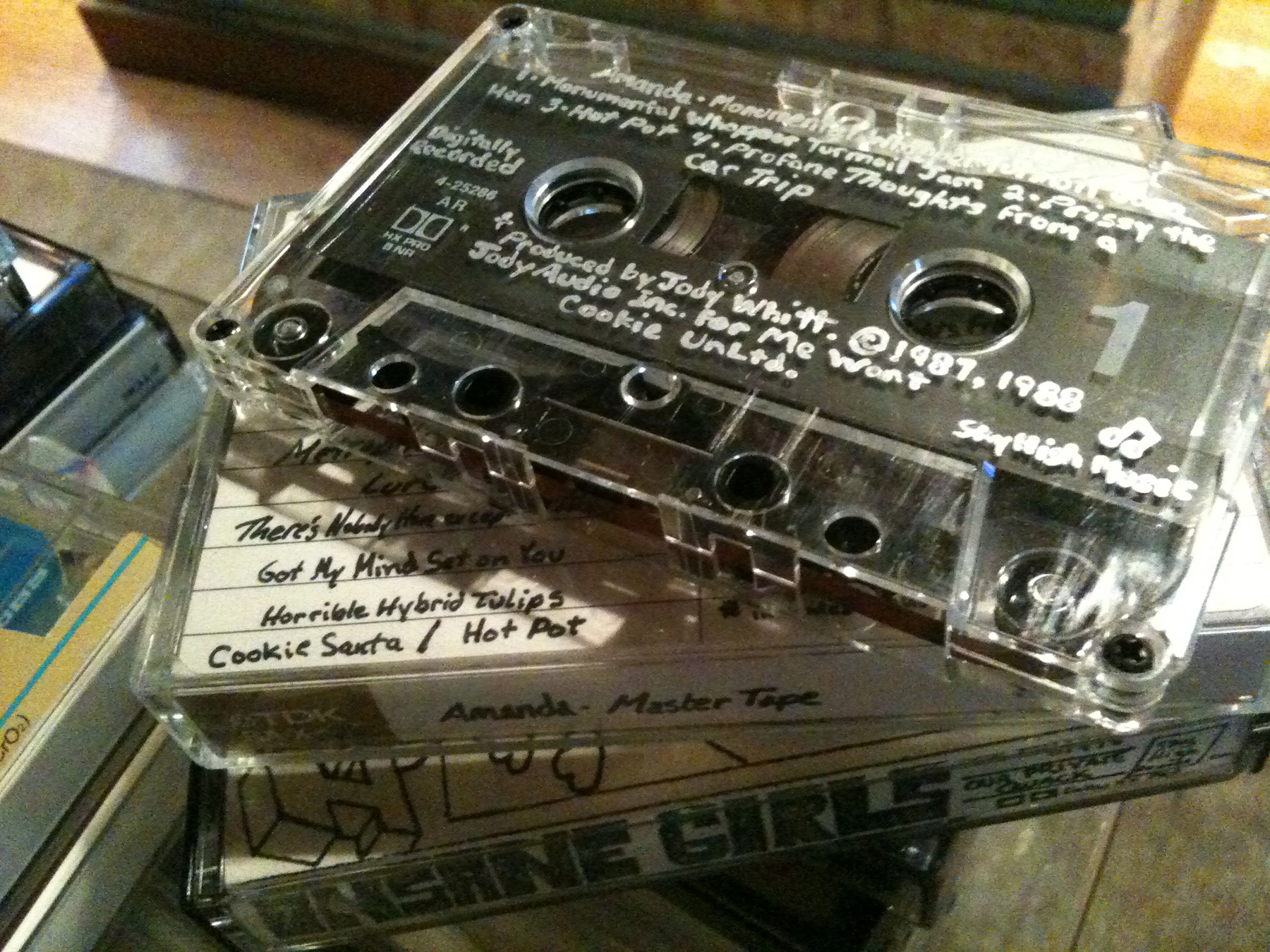 "Banana Smoothie"
From the album "Primitive Swagger."
Recorded in 1987.

"Carpet Burns On My Butt"
Not available on any album.
Recorded in 1988.
Background vocals: Tonia and Martin

"Prissy The Hen"
From the album "Monumental Whopper Turmoil Jam."
Recorded in 1987.

"Concrete Nipples"
From the album "Worship Me."
Recorded in 1988.

Don't Mess With the Power Child by Irwin Chusid

The "Amanda" recordings have emerged as an unexpected cult sensation on my WFMU program over the past two years. The chronicles feature Amanda Whitt, a growling (think Cookie Monster), defiant pre-pubescent with a Southern twang spewing mayhem over 1980s breakbeats and disjointed shards of pop hits. On some tracks Amanda shrieks while clanging pots & pans. The recordings exude undeniable charm, but there's nothing cute about it. Any sentient adult witnessing this behavior would commence punitive action or summon law enforcement.

Power-child Amanda was recorded between 1986-89 at home in Alabama, between ages 8 and 11, by her older (by 7 or 8 years) brother Joseph (a.k.a. Jody). Joseph and Amanda were a couple of hyperactive kids pretending to be, respectively, a music video director and a child star. Most recordings were captured on cassette, others on video cam, in the lowest of lo-fi. The duo sometimes enlisted friends in the frolics, and often drove their parents crazy (with incidents caught on tape). The most durable performances were titled (e.g., "The Pickle People," "Horrible Hybrid Tulips," "Indian Hoots Echo Baby," "Me Swinging in Cookieland") and compiled on "albums," whose design awkwardly replicated the commercial cassette format. Inserts were pasted up and xeroxed, and collections assigned titles (e.g., Primitive Swagger, Monumental Whopper Turmoil Jam, Empires and 5th Dimension Perspective, and Worship Me). The recordings were not circulated beyond friends.

At age 11, Amanda began to chafe at Jody's stage-brother puppeteering; she soon discovered boys, and the recording project was abandoned. The tapes were stored in shoe boxes in Joseph's closet, where they remained for decades as forgotten adolescent artifacts.

A longtime fan of WFMU and outré sonics, Joseph began to share recordings with my longtime buddy and DIY legend R. Stevie Moore. RSM layered electric guitar on one track ("Squaw Hootenanny") and slipped it on one of his self-released (but typically underheard) comps, where I discovered it. RSM provided the backstory and compiled me two CDs of Amanda madness. I instantly fell under the spell of her playful chaos and, encouraged by jubilant listener reaction, became the radio portal for Amanda's wider notoriety. I later connected with Joseph, who provided additional recordings.

Joseph moved to Brooklyn about four years ago; Amanda still lives in Alabama and manages a BBQ restaurant (part of a family-owned chain). During Amanda's trip north in July 2009, she and Jody met RSM and me for dinner in Williamsburg. On a back street brownstone stoop I taped an impromptu interview, which aired in two parts:

Amanda's singular appeal is difficult to explain. There's no artifice, and nothing remotely arty. At their best, the recordings are compelling in a car-wreck way. At their worst, they're a couple of obnoxious brats with a cheap tape deck. Yet Amanda's voice conveys elusive qualities with enormous appeal. Her delivery is brutal, her growl unearthly; yet there's a transcendent joy in her lack of inhibition. The gal has a repertoire of shrieks, howls, swoops and pet phrases. Most of my listeners find the recordings diverting and entertaining. A few strongly dissent‹one to the point of suicidal threats. You either get it or you don't.